This story is based on fact, but the names of the people involved have been changed to respect their privacy. The story demonstrates a true account with real events, told as truthfully as replication and effect allows. Vitiligo – Face, Knees, Hands.

Emelia, the young lady represented in this story, was not comfortable with our publishing her photographs – we have, therefore, used stock pics depicting the effects of Vitiligo in similar cases.

Emelia gazed at the mirror, critical of the new hairstyle. She was not sure whether the colour suited her. Her naturally soft brown curls had been reddened and straightened. The cut was layered, and her glossy hair skimmed her shoulders as she turned her head to see the effect the new colour had on her blue eyes. Emelia’s mother thought she was beautiful, but surely all mothers thought that their children were good-looking, clever, and well-behaved. Right? Emelia was already planning what else she would change to look prettier. Maybe if she got permanent, longer eyelashes? Emelia’s self-esteem had never been great, but it had taken a buffeting since she had been diagnosed with Vitiligo. The doctor had said that there was no cure and that it was not life-threatening. He also said that the patches were likely to grow and spread. He also recommended that she watch her diet, and wear cover-up foundation on her face.

Vitiligo occurs in about 1% or slightly more of the population throughout the world. Vitiligo affects all races and genders equally but is more visible in people with darker skin. Although Vitiligo can develop in anyone at any age, it most commonly appears in people ages 10 to 30 years.

Her mother had tried to make her feel better with age-old platitudes “Beauty is only skin deep.” and “What doesn’t kill you will make you stronger.” Emelia knew her mother had only been trying to make her feel better, and she had loved her for that. But Emelia hadn’t felt strong. She had felt ugly and ‘damaged’, in a way. Emelia had researched the well-known international model who had decided to embrace her Vitiligo patches and had brought global awareness to the disease. Although Emelia admired her for her brave stance, she knew deep down that she could never be that courageous! There had to be a way to stop Vitiligo’s disfiguring progression. She and her mother had done a lot of investigation on Vitiligo, and they had decided Emelia would try a new, healthy diet plan to see if her body would ‘fight’ this disease without additional intervention. Her family had always had a cheat day of burgers, fries, and milkshakes once a week. Emelia hated having to give that weekly junk food up!

There is no hard, scientific evidence to prove that a healthy diet can help treat Vitiligo. However, because it is an autoimmune condition, it is prudent to follow a healthy diet rich in beta-carotene, phytochemicals, and other natural antioxidants.

“Never mind, the long lashes will look great”, she thought. Emelia decided that she would concentrate on her evening out night with her new boyfriend, Alex. Still undecided about her new look, Emelia sat at her make-up station to get ready. They had been dating for a month now, and she was excited about the future. With her make-up items spread out on the counter, Emelia switched on her LED-lit, magnifying mirror. Shaking her head slightly, she stared at the white patches around her nose. They seemed to have grown since she had first noticed them two weeks ago! Horrified, she brought the mirror closer, to get a better look. That was when she noticed it! A small, white patch on her finger! 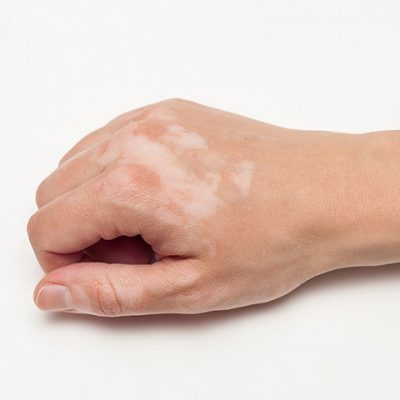 Emelia immediately called her mother to help her look for further Vitiligo spots. They found a small spot on the other hand, and one on her knee. Emelia was distraught! She had almost come to terms with her Vitiligo condition, believing that her white patches would repigment on their own. Emelia had not told anyone other than her family, about her Vitiligo. She felt ashamed and embarrassed and badly needed to feel ‘normal’. She assumed that people would recoil in horror if they saw her Vitiligo lesions.

People with Vitiligo may feel anxious about their skin. Sometimes people are rude – they may stare or say unkind things. This could cause a person with Vitiligo to develop low self-esteem. This in turn could create anxiety or depression issues and make someone want to isolate.

Emelia felt happy that her family was so accepting of her Vitiligo. She was certain that they were keeping her secret! Emelia believed her brother was stressing about getting it too! She had seen him staring at his face in the mirror when he thought that nobody was around.

With her mother’s help, Emelia covered the patches, applied her make-up, and got dressed. Alex arrived in his red Jeep, and they sped off to the supper club. Throughout the evening, Emelia pondered whether she should tell Alex about her Vitiligo. They hadn’t been dating long, but with summer fast approaching, Emelia knew that she couldn’t cover up her patches in the hot weather. Taking a deep breath, she told him about Vitiligo and her prognosis. To her amazement, he didn’t seem deterred at all. He, in fact, also thought she was very pretty and was so happy to have met her! Emelia felt her anxiety start to drain away, hoping it was not just false optimism, ultimately to be left disappointed.

But, although Emelia had lost a couple of kilograms, and her headaches were less severe, she started to become more introverted. The weather was getting hot, but she began to avoid the sun and wore jeans instead of shorts. Her white patches on her knees had grown. There were more smaller patches on her fingers, and the one on her face had grown much bigger. In addition to the patch under her nose, there was a small lesion next to her lips!

Renewing her research efforts, Emelia saw an article about creams and vitamins that claimed to reverse the effects of Vitiligo. Intrigued, she filled in the online form, and a Vitiligo Treatment consultant emailed her with a prognosis and treatment plan that would stop the further spread of the condition, and also start the pigmentation process again to the areas of her body that required treatment. Online, Emelia answered questions regarding her skin tone, age, allergies, thyroid, and emotional state. The consultant ascertained the percentage coverage and the timeline associated with the lesions. Together, they discussed a treatment programme that would suit Emelia’s current daily activities. The consultant assured Emelia that the products offered had been formulated based on years of Vitiligo assessments, dermatologists’ expertise and proven results. Emelia was also warned of the effects that sunburn would have on her depigmented patches, so she opted to stay out of the sun until her skin repigmented.

Vitiligo sufferers are more susceptible to sunburn because their lesions lack the natural protection from the sun’s rays which melanin provides to the rest of their skin. Most at risk are the areas where the skin is thinner such as eyelids, nose, neck, décolleté and the backs of the hands. Sunburns in these areas, therefore, in addition to being painful, can also cause Vitiligo lesions to increase in size. Sunblock – SPF 50+ is always a good option when venturing out into the hot sun.

Emelia knew that her high expectations were possibly not realistic. By nature, she was a sceptic! The Vitiligo Treatment consultant had told her that the ideal treatment would be the Vitilox® Pigmentation Cream and Vitilox® B12, Folic Acid and D3 Vitamin tablets. The cream is formulated to re-pigment the affected areas of the skin, and the vitamins to slow down and stop the spread of Vitiligo. Because of her scepticism, Emelia opted to only get the cream. Since being diagnosed with Vitiligo, Emelia had an aversion to all photographs of herself, especially when she was without make-up! The consultant assured her that her photos would never be shared or published!

Emelia started with the Vitilox® Pigmentation Cream on her Vitiligo patches. Two weeks later she noticed small ‘freckles’ of pigment returning to the affected areas. Thrilled by this, Emelia immediately got the Vitilox® B12, Folic Acid and D3 Vitamin tablets and used these products together. It took another three months for the patches on her knees and hands to repigment. As a maintenance regime, Emelia now only takes the Vitamin tablets. It has been five months since the start of her treatment, and Emelia is self-confident and even feels pretty. Her self-esteem has grown. She has even joined a local Vitiligo support group. With her great recovery results, she feels empowered to help others. Emelia now understands how empowering the international model feels about embracing her Vitiligo. Emelia feels just as powerful about being able to help people to treat the symptoms of Vitiligo.

As always, please don’t hesitate to contact us if you require any further information pertaining to this Case Study – Vitiligo – Face, Knees, Hands – or require any additional detailed information on our products.