Vitilox® T-Cell-V capsules (vegan) are required if your Vitiligo body coverage exceeds 25%, or if you are naturally predisposed to the Vitiligo condition. We also suggest using the T-Cell-V Therapy if you have had Vitiligo for more than 8 years.

Vitilox® T-Cell-V tablets is required if your Vitiligo body coverage exceeds 25%, or if you are naturally predisposed to the Vitiligo condition. We also suggest using the T-Cell-V capsules if you have had Vitiligo for more than 8 years.

Due to the high demand for this new immune therapy product, we have now made them available in a Combo Pack consisting of 2 units at a discounted price.

The T-Cell-V capsules are an immune booster therapy product, and has the required ingredients to stop the progression of your Vitiligo. This is very useful when you are also treating yourself with the Vitilox Pigmentation Cream or the Vitilox Lip Balm.

We also have seen pigmentation being induced in patients who have only just started to see a few spots of Vitiligo appearing. They can also be used as a maintenance product once your pigmentation has returned.

Vitilox T-Cell-V ingredients have been carefully selected to work together to regulate the immune responses in the alteration of the T-Cell’s in people suffering from Vitiligo. The T-helper cells heal and rejuvenate skin by the production of new cells. In patients with Vitiligo T-helper cells are arguably the most important cells in adaptive immunity as they also help activate cytotoxic T-cells to kill infected target cells.

Detection of various auto-antibodies including anti-thyroid and anti-melanocyte antibodies have been found in the serum of Vitiligo patients. These conditions are addressed in the Vitiligo T-Cell-V Therapy.

Zinc & Metallic Elements. These play a vital role in the melanogenesis process. The process of melanogenesis is responsible for normal and malignant melanocytes producing melanin. Melanin is the pigment found in the skin, eyes, hair, nasal cavity and inner ear. Vitilox T-Cell-V is essential to activate new pigmentation to counteract Vitiligo. In addition, Vitiligo is an inflammatory disease and these elements have excellent anti-inflammatory effects.

Vitamin B12, and  B6 have 3 main functions. To reduce stress and anxiety. To assist in the prevention of infections. To support and promote cell health.

Vitamin D3 1000iu is associated with an increase in tyrosinase activity, and melanogenesis which contributes to repigmentation in Vitiligo macules.

Folic Acid also has three main functions in that it is required to properly produce red and white blood cells, utilize carbohydrates as energy and thirdly produce healthy DNA.

Biotin is an important element for the functioning of healthy skin cells.

Zinc picolinate is a highly absorbable form of zinc, and these capsules boast 100 milligrams of zinc picolinate. Zinc is known as a potential antiapoptotic agent. Apoptosis of melanocytes is involved in the pathogenesis of Vitiligo. Thus, Zinc is a promising agent in the treatment of Vitiligo by preventing apoptosis of melanocytes. Zinc and other micronutrients have a key role in the process of melanogenesis.

Selenium has a vital role in the health of the immune system. Selenium is an antioxidant that lowers oxidative stress in the body, which in turn reduces inflammation thereby improving the body’s natural immunity.

One Vitilox T-Cell-V capsule (vegan) taken daily. The best time to take it is in the morning with or after breakfast.

Not recommended for children under 8 years of age. 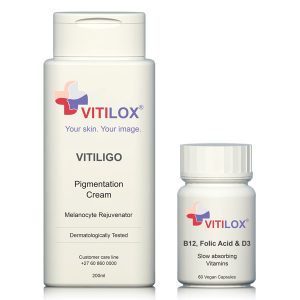 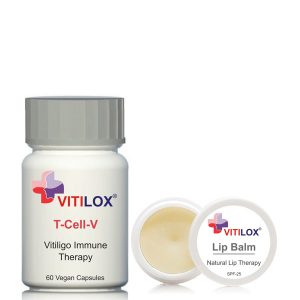 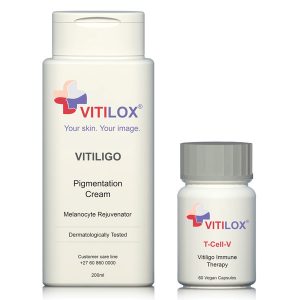 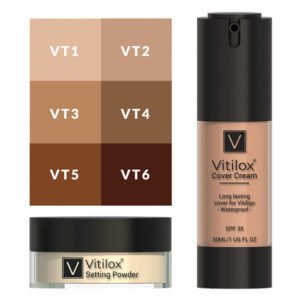 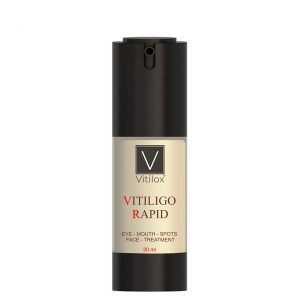