Is Vitiligo Hereditary? Can it be Prevented?

Why me? Your first question after discovering you or your child has developed Vitiligo is often why did this happen to me. Other family members start wondering if they may be next. The question is; Is Vitiligo hereditary? Consequently, people often ask if there is a chance of inheriting Vitiligo. And we ask this question on our free assessment form. This is a question we ask as the inherited genes would relate to auto immune diseases. Your answer to this question influences the type of treatment recommended.

Whichever type of Vitiligo you have, generally the de-pigmentation first appears on areas most exposed to the sun. Or areas such as the hands that have been exposed to chemical damage. Another area where Vitiligo first manifests is around scar area especially if you are predisposed to the condition. How we get our skin tone

Vitiligo is not a life threatening disease. It only affects the tone of the skin. The condition is not contagious. Because of a lack of knowledge there is a stigma attached to it. In some communities uneducated people will ostracize people with Vitiligo. They probably mistake it for leprosy which can also cause whitening of the skin.

Stress and embarrassment are however side effects of this condition. Often the suffers are victims of social stigma created by people who are uneducated. These issue create more problems for Vitiligo patients that the whitening of the skin.

It has been established about 25% to 50% of Vitiligo cases are genetic. They have relatives who also suffer from the condition. While generally it is not usual for 2 siblings to have Vitiligo most of their parents will have had Vitiligo. They have a family history of autoimmune disease, not specifically Vitiligo. Researches have discovered three faulty genes that cause these autoimmune diseases.

Environmental factors play a part in the development of Vitiligo. So while predisposed to the condition factors such as sun damage, allergies and lacerations for example usually trigger the start of the condition.

Our patients who are predisposed are usually prescribed the Vitilox Pigmentation Cream and also the Vitilox T-Cell-V tablets.

The cream penetrates deep into the layers of skin stimulating the melanocytes into producing Melanin. The cream is non oily and easily absorbed.

The T Cell V contains not only Vitamin B and folic acid which assist in cell production but also essential metallic elements. It has been found that patients who are genetically predisposed to Vitiligo lack certain metallic elements. These same elements are contained in out Vitilox T-Cell-V tablets. Can it be Prevented?

Vitilox PMF – Pigmentation Management Formula, maintains the immune system. They ensure the white patches do not reappear on any other part of the body. It is recommended that these capsules are taken for at least six months after complete re-pigmentation. Vitilox PMF controls homocysteine levels. They are therefore recommended as a preventative measure. The benefits from Vitilox PMF is important for anyone who believes they are at risk on contracting Vitiligo. 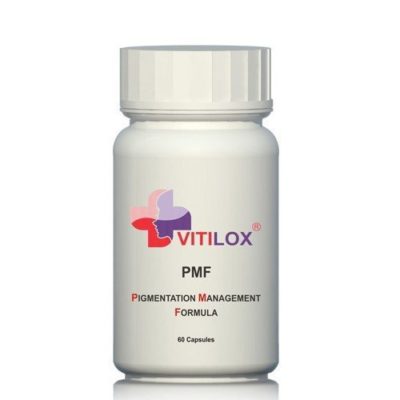